My name is Aminata Madina Ouedraogo and I am 30 years old. I grew up in Bobo Dioulasso and I took my baccalaureate (post-16 education) there, but I didn’t pass it. A year later, while at my big sister’s in Ouagadougou, I tried again, and got my baccalaureate with the help of my brother-in-law. After that, I decided to continue my studies at university.

I am from a family with six children. I lost my mother when I was in CP2 (early primary school). Four years later, my father also died.  Our siblings were then separated, and my little brother and I went to live with our aunt. My brother became like my own child, and he sadly died. It destroyed me: my marks continued to fall and I no longer spoke to anyone. Fortunately, I have now recovered. I understood that I need to pick myself up, whatever happens. Finding a job really helped me. 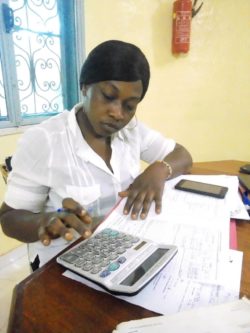 My support manager at Yikri* helped me, and made me realise that I have potential. I had applied for several positions and was taken on by Yikri, and have been employed there as a lending manager ever since. I identify beneficiaries and their businesses and then prepare their applications. After that, I track the business owners’ progress so that I can advise them and help them avoid getting into repayment difficulties. With the income that I earn, I can continue to pay for my university studies. I’m also planning to open a restaurant, and I am in the process of creating my own organisation advocating for female/male equality.