Muhammad Yunus visits us in Cambodia

On his first trip to Cambodia, Muhammad Yunus visited Chamroeun and its beneficiaries

Muhammad Yunus, awarded the Nobel Peace Prize in 2006 for his tireless work developing and promoting microfinance and social enterprise, visited Cambodia for the first time in March 2014. He took part in a field visit with the Grameen Crédit Agricole Foundation’s directors – as he is one of them – which supports Chamroeun, an MFI* set up by Entrepreneurs du Monde in 2006 and now one of the ten most important in Cambodia, as well as for its beneficiaries, who had worthwhile discussions with Prof. Yunus during his half-day field visit. 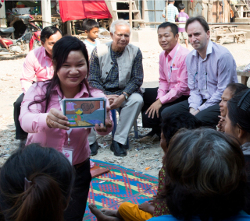 In Boeung Tumpun, a shanty town in the south of Phnom Penh, Prof. Yunus attended a training session on over-indebtedness, attended by around twenty women and their children. Almost all the inhabitants of this marshy area make their living from market gardening. They grow crops in the fields around stilt houses which are completely surrounded by water in the rainy season and sell their produce in Phnom Penh. Chamroeun has been active in the area since 2008 and currently works with around 100 beneficiaries.

The conversations that took place after the training session flowed very easily: the women living there have much in common with the women in Bangladesh who prompted Muhammad Yunus to dedicate himself to microfinance in the first place: working mainly in agriculture, their houses exposed to frequent flooding, the women in particular living in poverty and uncertainty… but retaining for the most part a real entrepreneurial spirit!

One participant, Vannak Meas, spoke of her own success: from an initial loan of €54 from Chamroeun she was able to steadily develop a business cultivating water spinach, a much-loved ingredient in Cambodian cuisine. She is currently paying off her twelfth loan, of €324. Muhammad Yunus had some words of encouragement for Vannak and her fellow entrepreneurs, sharing with them his belief that people really can change their lives completely, one step at a time. Vannak explained that families in the area nonetheless find themselves in a precarious situation. They all rent their land and are at risk of eviction; little by little the marshes are being filled in and sold to investors for construction or commercial projects. When this happens, families risk losing their houses and source of income. 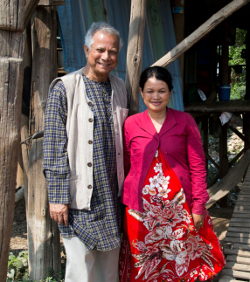 Emue, one of Chamroeun’s partners, approached Prof. Yunus at the end of the training session to share one of the community’s strongest desires: to be able to afford medical care for their families. Sophea Suon, director of Chamroeun, then explained that the IMF is currently testing a microinsurance scheme in another part of Cambodia. It will be rolled out to all 15 of the regions in which Chamroeun is working. 55,000 micro-entrepreneurs will be able to benefit from this.

Theary welcomed Prof. Yunus in front of the house she lives in with her husband. Their two children aged 8 and 10 live with their grandparents in the south of Cambodia, near the border with Vietnam. Thanks to a loan of €317 she is able to rent the land they farm, buy the seeds and tools they need to do so and cover the family’s expenses while they wait for the harvest.

Yunus also held extensive discussions with Chamroeun’s management committee, members of its administrative council and the Entrepreneurs du Monde team. In particular, he encouraged Chamroeun and Entrepreneurs du Monde to invest in businesses launched by young entrepreneurs, to organise design labs where young people can come to present their business ideas and find partners and funding, and to offer professional training that students can pay for once employed. In relation to the textile industry, which represents 10% of the country’s GDP and employs 90% of women, Yunus suggested training young women to work the machines used in factories so that they can find jobs and rapidly improve their income thanks to increased efficiency. He demonstrated a significant commitment to helping the young and the unemployed become entrepreneurs. 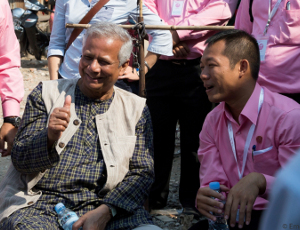